Evaluating Health Information on the Web

Online Printing Upgrade in the Library!

The Library hosted a commemorative event on November 12, 2013 celebrating the legacy of Saul R. Korey, MD, the founding Chair of the Department of

Neurology at Einstein, who died of cancer in 1963, at the age of 45.  The event noted Dr. Korey’s vision of multidisciplinary basic research and clinical medicine in human disease.   Colleagues and trainees of Dr. Korey were in attendance, Drs. Isabelle Rapin, William Norton, Robert Ledeen, Stanley Samuels, Herbert Vaughan, Lewis Rowland and Oliver Sacks, to name a few.  Drs. Robert Terry, Irving London, Cedric Raine and Kuniko Suzuki attended virtually via web conferencing from as far away as Japan.  Also in attendance were Dr. Mark F. Mehler, current Chairman of Neurology and Dr. Solomon L. Moshe, the first recipient of the Saul R. Korey Award for Translational Medicine and Science and DominicK P. Purpura, MD, Professor Emeritus of Neuroscience and former Dean of the medical school. The event was streamed live from the Library for others who could not attend. Mrs. Doris Korey and daughter, Cathie Korey, MD, attended the event at Einstein.

Peter Dama, Director of the Graphic Arts Center, created a fabulous 6-panel mural display of photographs and text illustrating Dr. Korey’s life and career.  The mural was recently transferred to grace the halls of the Saul R. Korey Department of Neurology on the 2nd floor in the Kennedy Center.  Tatyana Harris, Graphic Designer, compiled a wonderful  exhibit in the Library glass display cases of photographs and articles by physicians and scientists who worked alongside Dr. Korey or whose work was a result of his groundwork and teaching, notably Tay-Sachs and Alzheimer's diseases.  The display also includes Dr. Korey’s microscope, Dr. Purpura’s camera lucida ink drawings of damaged neurons and Dr. Terry’s micrograph of Tay-Sachs neurons which was displayed in 1967 at the MoMA in NYC.  This exhibit will be on display outside the Library through the end of December.

Librarians actively participated in planning the event and identified monographs and articles for the exhibit.  Many of  the photographs and documents displayed in the exhibit and 6-panel mural came from the Library’s Archives.  Karen Gardner and Eduardo Ayala from the Communications and Public affairs Department put the different pieces together and coordinated individual contributions, interviews and testimonials for a fantastic event.  Nearly 75 people attended the event. The social and intellectual energy and camaraderie of the participants was a fitting tribute to the vision and character of Saul R. Korey, MD .

More information and photographs of the event and the history of the Saul R. Korey Department of Neurology  may be found in the following links:

Evaluating Health Information on the Web

The Library has published a new research guide, Evaluating Health Information on the Web which can be viewed at http://libguides.einstein.yu.edu/websiteevaluation.  This guide discusses evaluation criteria to be used in evaluating health information on websites and social media sites.

Do you have folders upon folder of PDFs on your computer? Can you find the right article when you need it? EndNote is a powerful tool for managing PDF files.

·        Import PDF files (and folders of PDFs) into your EndNote Library

Register for the class and learn how EndNote can help you manage your PDF files.

A patch for EndNote for Macs is available. EndNote X7 users should be prompted to upgrade to X7.0.1 the next time they open the program.

·        contains critical updates for Sync and Cite While You Write

It appears the EndNote versions X5 and earlier are not compatible with Mavericks. As of now, EndNote is not planning to release updates to older versions. Anyone still using EndNote X5 or earlier should upgrade to EndNote X7. To find out which version of EndNote you have, select “About EndNote” from the EndNote X7 menu.

EndNote X7.0.2 for Windows, released in October, fixes some issues with Sync. To find out which version of EndNote you have, select “About EndNote” from the Help menu in your EndNote program.

SPSS Statistics is now available on all computers in the Library as well as the Beren Study Center. SPSS Statistics is a statistical package produced by IBM and is among the most widely used programs for statistical analysis. Statistical analysis, data management, case selection, file reshaping, creating derived data, and data documentation are among many features of the base software, which includes descriptive statistics; bivariate statistics; prediction for numerical outcomes: prediction for identifying groups; and numerous other features.

For further information about this package please visit http://www.spss.com/

Online Printing Upgrade in the Library!

The College’s OCS print management system was upgraded during the Thanksgiving weekend.  As part of this upgrade, Windows users must download and install the updated version of the OCS FTP wireless printing module.

If you have questions or problems, please contact ITS at classroomsupport@einstein.yu.edu or 718.430.2332.

Due to new licensing restrictions, access to UpToDate will be changing.

Effective January 1, 2014 the Library’s subscription to UpToDate will be available only to Einstein students and Einstein faculty at the medical school.

New UpToDate authentication procedures for Einstein students and Einstein faculty at the medical school will be phased in during December.

PubMed recently introduced a new relevancy sort feature, available from the “Display Settings” drop-list. Sort order is calculated based on an algorithm in which the frequency of search terms in citations and fields in which they appear are weighted, as well as the citation’s recency.

Read more about it here http://www.nlm.nih.gov/pubs/techbull/so13/so13_pm_relevance.html 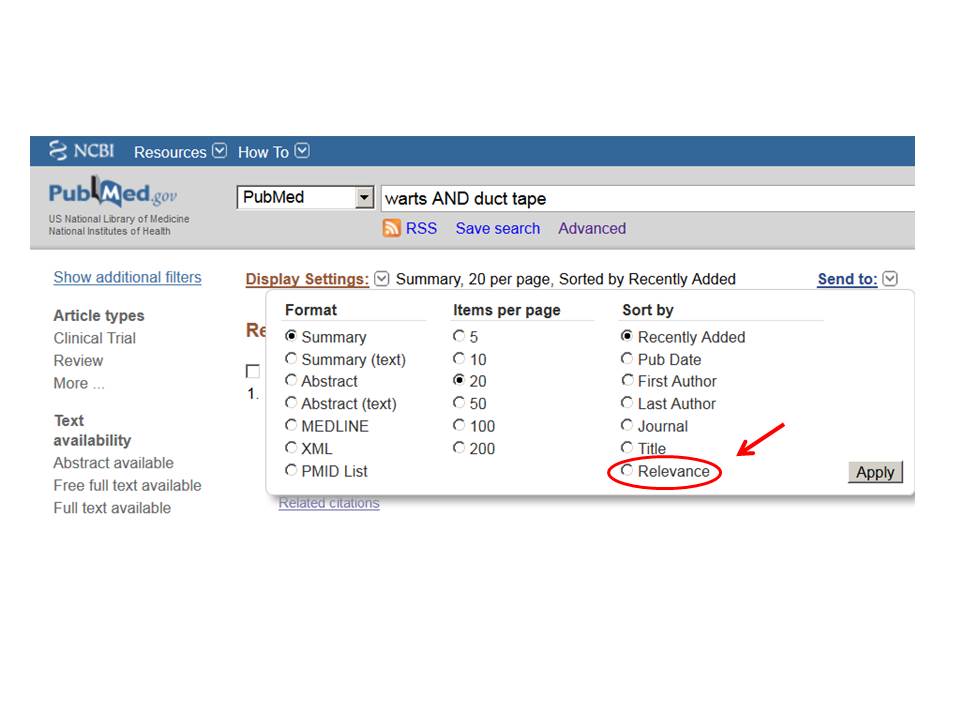 Join the Book Club for a discussion of Nobel-prize winner Alice Munro's short story collection, The Love of a Good Woman on Wednesday, January 8 at 9:00 a.m.

The Book Club is open to all members of the Einstein community.  Meetings are held every other month.

For more information, take a look at the Book Club’s website.