Contact the Reference Department for more information, or to schedule an individual or small-group session.

See our full listing of events. 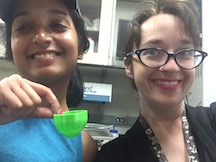 Digital initiatives librarian Winifred King (right) recently collaborated with medical student Tushara Surapaneni (left) on a test project for the Physical Medicine and Rehabilitation Department. The project, a flexible cup with a rounded bottom (designed to be scaled up as a sleeve for a prosthetic arm), required flexible filament.

The manufacturer’s website specified that a well-ventilated space was needed when using the proposed filament. The library lacks such a space, but Dr. Michael Brenowitz, who has supported the Library’s 3D printing initiatives in the past, generously offered his lab and the use of the lab’s fume hood for the project.

On June 28, Tushara and Winifred wheeled the 3D printer up to Dr. Brenowitz’s lab to do the test print. Although the library’s MakerBot does not natively support printing with flexible filament, after several hours, the three found a way to manually feed the filament into the printer. After a few attempts, they successfully printed a flexible cup.

Have a special 3D project for an internship, rotation or class? Winifred is available for consultation at 3D@einstein.yu.edu. 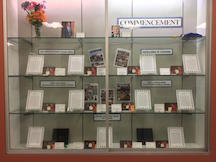 Stop by the Library to see the 2017 Commencement Exhibit now on display. This year’s commencement speaker was global health leader and former Centers for Disease Control and Prevention (CDC) director Dr. Tom Frieden. The exhibit honors students, a number of individuals and faculty members with Lifetime Achievement Awards, Distinguished Alumni Awards and Excellence in Teaching Awards.

We extend congratulations to everyone on their graduation and wish you success in the years ahead.

MutaGene is a new, freely available resource from the National Center for Biotechnology Information (NCBI) to aid understanding of the mutagenic factors contributing to tumor development. It uses the cancer genomics data collected by The Cancer Genome Atlas and the International Cancer Genome Consortium to analyze somatic mutations and their local DNA context in about 10,000 cancer donors and 37 different tumor types and subtypes. MutaGene builds mutational profiles of tumors and identifies the combinations of underlying somatic mutagenic processes.

The site was designed to help health practitioners learn to build an effective, evidence-based program and explore emerging practices and programs. Users can access brief videos, case studies, stories, workbooks and various other tools to translate research about the development, implementation, and sustainability of evidence-based programs and practices for communities in need.

Resources in the new Learning Center are organized around five thematic areas:

The National Library of Medicine’s portal, Opiate Addiction and Treatment, includes links to resources on topics such as 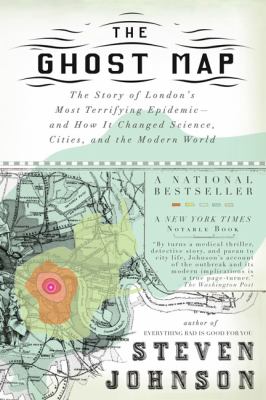 The Book Club’s next selection is The Ghost Map, by Steven Johnson. As noted in the Chicago Tribune, “This is more than a great medical detective story. It's the triumph of reason and evidence over superstition and theory, and Johnson tells it in loving detail.” The Book Club welcomes new members from the entire Einstein community. Join us for a discussion on Tuesday, September 12, at Noon.